The Battle of Horst

This wargame is also part of a campaign based in 1813. It takes place one day after the previous battle of Bucholz.

Horst is north west of Bucholz, and 3rd Prussian corps were deployed in and around the town. 3rd French corps have orders to take the town.

The wagame was fought in October 2008 using 28mm figures 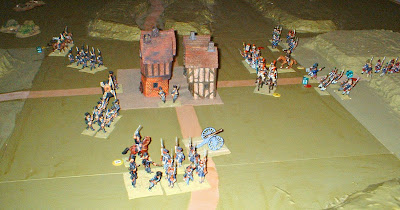 The French entered through the hills on the right. The Prussian hussars moved forward to spot them, but were charged by the cuirassiers and routed (on left of photo).

The Prussian artillery in the foreground have already routed the leading French infantry brigades, but the loss of their cavalry support has caused them to abandon their guns and seek safety behind the infantry square.

The French have lost three of their infantry brigades (left), but one brigade still poses a threat as it is supported by artillery and the cuirassiers.

The Prussian infantry (right) advance in column to support the garrison of Horst. 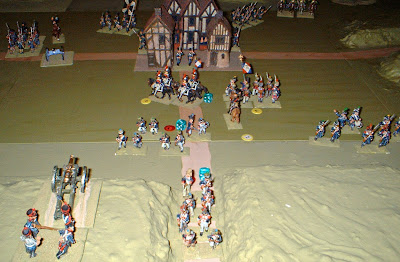 The remaining French infantry brigade, and the cuirassiers, have both failed their morale due to the rout, and are now Shaken.

The French commander orders a general retreat leaving the Prussians in control of the town.
Posted by thistlebarrow at 11:28