The Austrian army are advancing down the Danube valley towards . 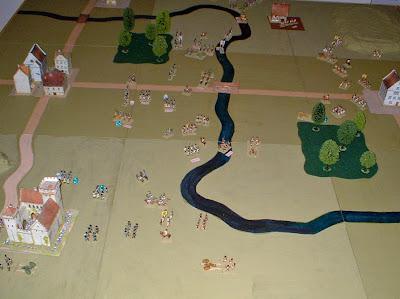 is the four building stand at the cross roads on the left of the photo.

The top road leads to

The bottom road leads to

The left road leads to Ratisbon

The right road leads to

The Bavarians (Jan) are defending on the left

The Austrians (Paul) are attacking from the right

Both armies enter their side of the table on move one

The river is fordable to infantry and cavalry, but artillery must use a bridge 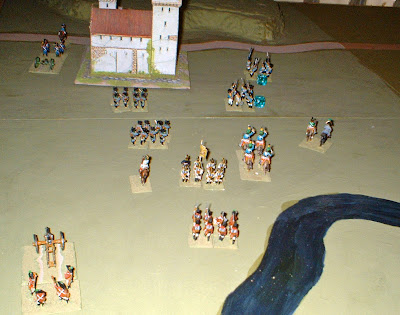 The 1st Austrian Korps have crossed the river and are advancing against the Bavarian right flank, which is anchored on the schloss. Cavalry have forced the supporting infantry into square, and the jagers are about to storm the schloss. 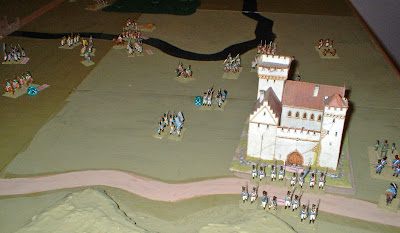 The Austrians have captured the schloss and routed the garrison. They are about to swing right and roll up the whole Bavarian position. 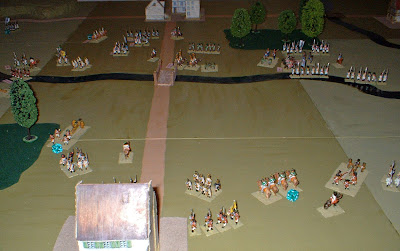 The 2nd Austrian Korps approach the Bavarian centre, but it is too strongly held for them to attempt to storm the bridge. On the far left the 1st Korps, who stormed the schloss, are starting to swing right, which will allow 2nd Korps to take the bridge and push on to Landshut. 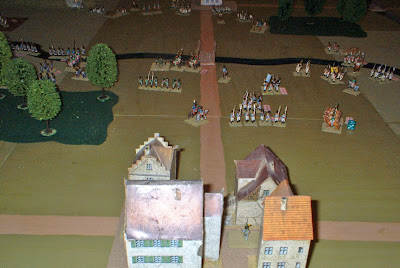 The Bavarian centre is under pressure from 1st Austrian Korps who are approaching from the left. 2nd Austrian Korps, top of photo, are waiting for their opportunity to storm the bridge. 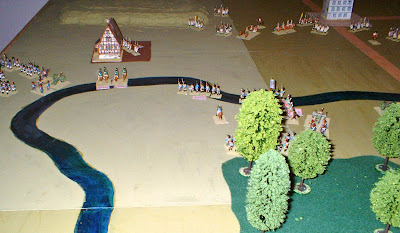 The Bavarians are attacking on their left. One corps has advanced to the left ofthe river and is approaching the lightly held farm. A second corps is crossing the river in support. 3rd Austrian Korps has deployed well back from the river in a defensive postion to hold their right flank while their main attack is delivered on the opposite flank 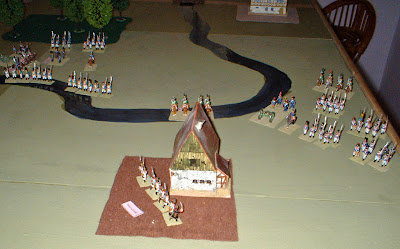