Celle is the town in the middle at the cross roads. The centre road leads to Luneburg at the top of the photo and Brunswick at the bottom. The road left leads to Burgdorf and right to Bergen. Jan commands the Prussians who must hold Celle. Paul commands the French who are attacking from right to left.

This wargame was fought in April 2008. It was another of the 1813 campaign games. Each game was designed to be played in one day. If it was a club game it always finished the same day, though sometimes it would have to be stopped early and winner agreed.

When we played this game we were introducing new rules, so Jan and I played it on our own so that we could just stop and restart if we found one rule was not working.

The campaign background is that the Prussians are retreating to Burgdorf, and have left a rear guard at Celle to delay the French. The French must take the town without delay, or they will lose their touch with the retreating Prussian army.

Table Right. The Prussians have lost the combat on their right flank and are in retreat.

Table Centre. The Prussians have been driven out of Celle and are retreating . 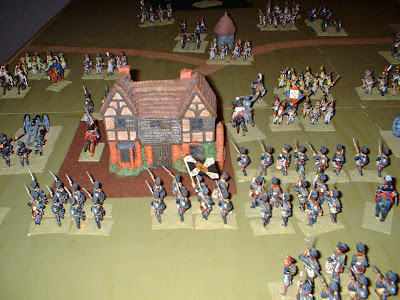 Table Left. The Prussian are holding their left flank, but are under French attack

Table Right. The French have pushed their artillery forward to break the Prussians.

Table Centre. The French have taken Celle and are in pursuit of the retreating Prussians.

Table Left. The Prussians are holding the village, but only just. All out French attack.

The French won, and the Prussian retreat continued.