After their defeat at Bismark, the fourth French corps retire towards , where they are joined by sixth corps. The combined army march back towards Bismark, but find second and third Prussian corps blocking the road at Colbitz. 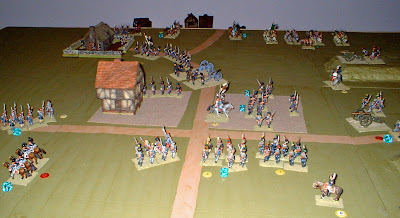 Second French corps attack Colbitz from the north along the road. They fight their way into the western section of the town, but are driven back again. As they retire they are charged by a brigade of Prussian cuirassiers (left), but they hold their ground and rout the cavalry.

Two of the four French infantry brigades are shaken (yellow marker nearest camera) whilst a third in rout (red marker on right) and take the gunners with them. Only one brigade remains (left nearest camera) to cover the withdrawal.

Sixth French corps attack the town from the south. A cavalry brigade leads the infantry columns, and they have already repulsed a Prussian cavalry brigade. After the brief cavalry melee the French (left with green marker) are disordered but have forced the Prussians (right with yellow marker) to retire shaken.

Before they reach the Prussian line, second corps (top of photo) have already broken and are in retreat. This has allowed the Prussians to redeploy their artillery (centre near town) which now outnumber the French two to one.

On receiving news of second corps rout the French commander in chief orders sixth corps to withdraw towards and cover second corps.