This 28mm game was set up on 10 September 2007. The aim was to see if we could play a Spanish guerrilla v French infantry type wargame using our amended LFS rules. The objective of the game was for a French division of 4 infantry brigades and a battery to rescue a single infantry brigade which was surrounded by Spanish regular and irregular troops.

The French had to make their way along the road, with Spanish troops hidden on and behind the hills. To spot the Spanish, the French had to climb the hills, this would delay them reaching the isolated brigade which was under attack from the start of the game. 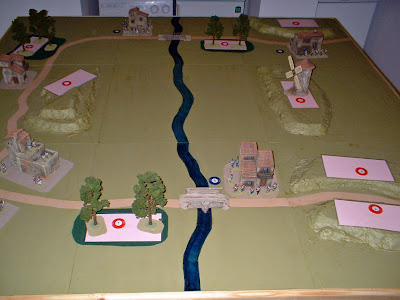 The whole table at the start of the game. The cards might, or might not, indicate the location of Spanish regular or irregular troops. The isolated French infantry brigade is at the far end of the table on the right. There is a support brigade at the far end on the left. The relief force is in the village front left, the rear guard front right will hold the bridge and road so that they can all retreat. 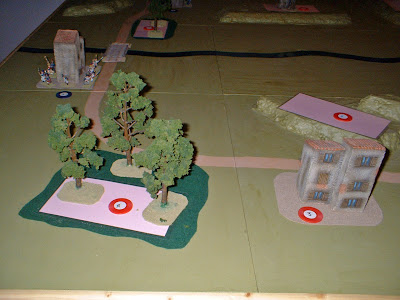 French left at start of game. The isolated brigade is in the village beyond the river, the support brigade in the nearest village. The Reinforcements will come from the right. The red markers indicate possible Spanish troops. 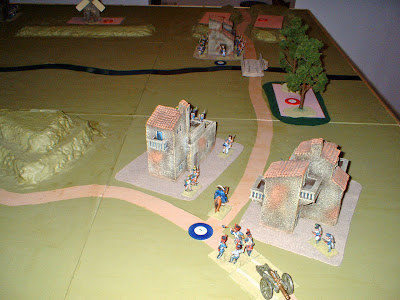 The French right at the start of the game.The two infantry brigades, plus the artillery, in the nearest village are the relief force. The third brigade in the village on the far side of the river is holding the road open for them all to retreat. 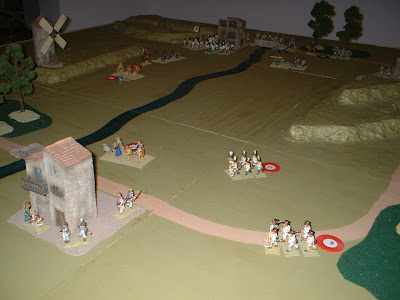 The French left in the middle of the game. Three Spanish brigades are attacking the single French brigade holding the road the French will retreat down. 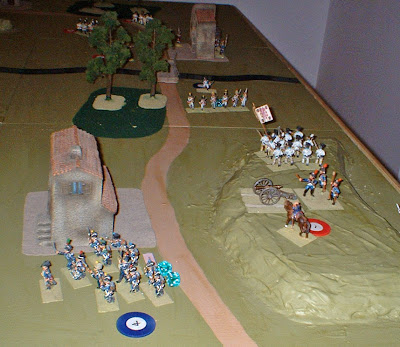 The French centre in the middle of the game. The French in the foreground have tried to storm the hill, but have been routed. More French have crossed the river and are approaching the hill. 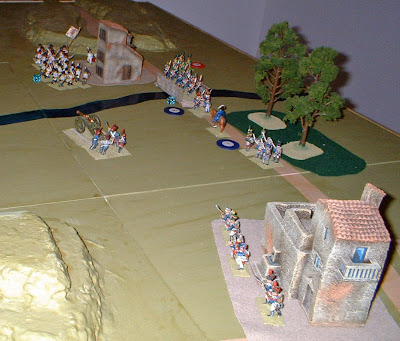 The French right in the middle of the game. The brigade holding the bridge and retreat route have been routed towards the divisional headquarters. The Spanish now control the road and the whole French division has been cut off. 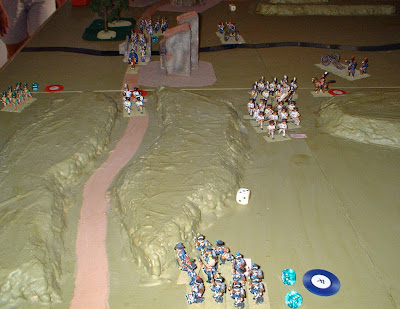 The French right at the end of the game. On the Spanish side of the river all available troops are holding the bridge. Behind them the isolated French brigade continues to rout to safety. 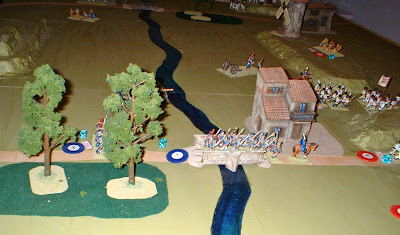 The French right at game end. The French division have stormed the bridge and opened the road again. The defending Spanish troops are all in rout, except for the field battery who are trying to hold the bridge.